The Denver area, part of the Territory of Kansas, was virtually unsettled until the late 1850’s.  In 1858, Green Russell and Sam Bates discovered the first significant gold discovery in the Rocky Mountain region.  By spring 1859, tens of thousands of gold seekers arrived and the Pike’s Peak Gold Rush was under way.

On October 24, 1859, an election was held to form a provisional government for the goldfields.  The formation of the provisional Government of the Territory of Jefferson was approved.  Robert Williamson Steele was elected Governor.

On February 28, 1861, President James Buchanan signed an Act of Congress organizing the free Territory of Colorado.  On March 25, 1861, President Abraham Lincoln appointed William Gilpin the first Governor of the Territory of Colorado.   The Colorado General Assembly first met on September 9, 1861, and the legislature created 17 counties including a new Arapahoe County with Denver City as its seat.  In 1865, Denver City became the Territorial Capital and shortened its name to just Denver.

In the 1880’s silver was discovered in the nearby mountains, leading Denver to a new stage of opulence and beautiful architecture.  In 1883, the first courthouse was built.  The courthouse stood between 15th and 16th Street, and Tremont and Court.  It was demolished in 1934. 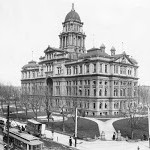 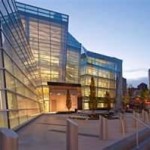 The City and County Building, the current home of several County and District Court courtrooms, was built in 1932.  The Lindsey-Flanigan Courthouse was built in 2010.